Babbling is one of the most loving activities performed by infants. Parents love the babbling sounds so much that they talk to infants in babbling like sounds. People think that babbling sounds are meaningless and are just a part of an infant’s play. However, the fact is that infants use babbling as a stepping stone towards learning language and becoming social. An in-depth study of different aspects of babbling like rhythm, sounds, intonations, and syllables reveal that babbling is not just a mouth play but a part of language acquisition skill. 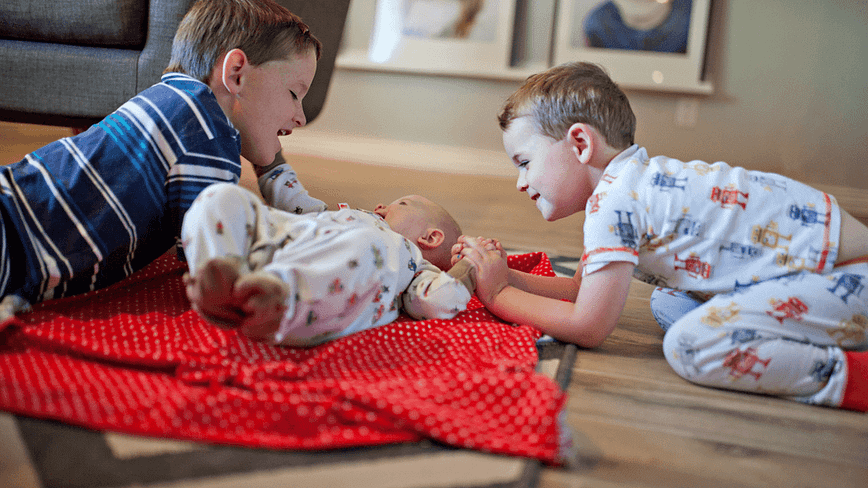 Babble is a noisy speech-like sound created by infants made of syllables and word-like sounds (Oller 2000). The sounds created during babbling suggest that the child is trying to express its evolving thought pattern and is trying to speak like adults (Oller 2000). “Although words and phrases are not part of infant babbling, the babbling sounds suggest that infants are trying to reach the” degree of human comprehension that only language seems to offer “(Oller 2000).

At the age of two to three months (O’Grady 2005), an infant begins making cooing noises and speech-like sounds. The speech-like sounds are fully formed by a period of around six months (O’Grady, 2005). The child learns to allocate different meanings to various sounds (O’Grady 2005). At this point, he begins to use these sounds as a language. With facial expressions, hand gestures, and leg motions, babbling is followed. It is not an independent bodily motion.

The Biological Aspect of Babbling

Human beings can produce speech and sound with the help of their vocal apparatus. The speech organs like the tongue, larynx, throat, and vocal tract play an essential role in producing sound and speech (Guasti 2004). Adults can make impeccable speech and sound as their speech organs are in a fully developed form. However, a study by Lierben, Crelin, and Klatt (1972) has found that the newborn baby’s speech organs are not completely developed (Guasti 2004). The newborn babies have “higher larynx, smaller throat, shorter vocal tract, and different tongue shape” than adults (Guasti 2004). The underdeveloped condition of the speech organs does not allow the infants to produce speech and sounds like adults. The shape of the vocal tract in an infant is different from an adult, and this difference results in a difference in the resonance cavity of infants and adults (Guasti 2004). Around four months, the larynx in infants starts to descent and comes lower than that in adults (Guasti 2004). It is around this time that the infants begin to produce speech-like sounds (Guasti 2004). The descent of the larynx is completed by three years, and it is at this age, children can talk clearly like adults (Guasti 2004). This shows that infants can produce the first form of speech-like sounds only when the oral cavity configuration is complete (Guasti 2004). According to Studert-Kennedy (1991), the vocal apparatus’s development is one of the pre-requisites for infants’ speech (Guasti 2004). When the articulated device gets developed completely, the infants begin to use sounds (babble) to express themselves. The exciting thing is that the speech-like sounds contain the sounds found in the natural language spoken by their parents. This shows that babbling in infants is not just a mouth play but also relates to language acquisition.

Locke (1983) has found that babbling is a form of linguistic production in which the infants use the sets of “possible sounds found in natural languages” (Guasti 2004). Locke’s finding shows that the sounds used in babbling by infants are not random but are related to the language in which their parents talk to them. Hence, the sounds are not just mouth play but are part of the language. However, studies have found that infants do not produce language-specific sounds in the initial stage of babbling, but after getting enough exposure to the native language (Guasti 2004). This fact strengthens the point that babbling is one technique used by infants to learn to speak the language.

Language has an effect on children right from birth. Even though the impact of language on babbling is not visible initially, the constant exposure to language spoken by their parents makes the infants pick up the vowels and consonants specific to that language. Different studies have revealed that by the time the infants reach the age of 8-10 months, their babbling is modulated by the language they hear from their parents and caretakers (Guasti 2004). The behaviorists explain the babbling with the theory of reward and punishment. According to Winitz (1969), the vocalizations used by a mother while feeding her child is associated with the primary drive of hunger by the infant (Ingram 2003). The infant begins to associate vocalization with food, and whenever he feels hungry, he uses similar sounds to convey the message of hunger (Ingram 2003). The infant’s sounds are reinforced by the response he gets from his mother (Ingram 2003). Later on, the infant is also rewarded by patting, cuddling, or feeding on his mother (or father) when he produces similar sounds (Ingram 2003). In this way, babbling is reinforced by reward from parents. Hence, infants learn to make different babbling sounds to get other ‘rewards’ from parents. The infant’s efforts to produce sounds like adults show that he is trying to learn the adults’ language. In this way, babbling becomes a practice to acquire the native language.

Also, infants try to imitate different aspects of the target language. One of the essential elements of babbling is modulation. It was found that the modulation of infant babbling shows specifications of the language the infants are exposed to. A study by Boysson-Bardies et al. (1989) shows that the quality of vowels produced by infants varies according to the linguistic communities they are reared in (Guasti 2004). Infants raised in different linguistic communities like French, British, Cantonese, Arabic, and Swedish produce different babbling sounds (Guasti 2004). A study by Boysson-Bardies and Vihman (1991) revealed that the surrounding environment influences the consonant sounds produced by infants of 10 months (Guasti 2004). Infants from different language communities are found using other parts of the mouth while babbling due to language influence. For example, infant French learners use labials in babbling more than infant American English learners as labials are more frequent in French (Guasti 2004).

There are many examples of babbling where the observer realizes that even though the sounds are meaningless, the infants are trying to say something with those sounds.

These examples show that babbling sounds not only have hidden meanings, but they also offer a sign of language acquisition skill.

The initial phase of infant babbling starts with a single syllable sound like ‘mammama,’ ‘bababababa’ or ‘gagagaga’ (Clark 2003). The single syllable sound produced in the earliest babbling consists of a single consonant sound (g, b,m, p) followed by a vowel like sound which usually is similar to ‘a’ (Clark 2003). As the infant hears the language spoken around him, his babbling sound becomes more extended, and its frequency also increases (Clark 2003). After this phase, the infant starts using one consonant-type sound more frequently than others showing the comfort with that sound (Clark 2003). After learning to use the sounds similar to the native language, the infants also learn to use the native language’s intonation in their babbling (Clark 2003). Infants mirror even the combination of syllables from the language that is spoken by people in the surrounding. A study by Boysson-Bardies (1993) revealed that the form of disyllabic sequences is CVCV (C=consonant, V=Vowel) in French, English, and Swedish language pattern and VCV in the Yoruba language pattern (Guasti 2004). Infants reared in French, English, and Swedish language communities are found mirroring the CVCV disyllabic sequence in babbling. Infants being raised in the Yoruba language community are seen reflecting VCV disyllabic sequence while babbling (Guasti 2004). Vihman (1996) found that by the age of 10-12 months, the infants mirror sounds, intonation, rhythm, and syllable patterns in babbling from their surrounding language (Clark 2003). The infant’s mind tries to give practice to his tongue, cheek, and jaws to get used to the target language by using the sounds heard in the surrounding. In this way, infants use babbling as a stepping stone towards learning the target language. However, studies have also shown that babbling is not just a language acquisition skill but is also a mode of expression.

It has been observed that different facial expressions and body language always accompany babbling in infants. This shows that infants are “innately programmed to babble” (Ingram 2003). According to Stern, the ‘impulses’ and the ‘inner energies’ of infants drive them to babble (Ingram 2003). Stern believes that the two significant drives that lead to babbling are the drive to express oneself and the industry to socialize with others (Ingram 2003). The practice of language sounds helps the infants express themselves and later learn to pronounce the words (Ingram 2003). Also, infants form an association “between certain states of feeling and the sound-forms belonging to them” (Ingram 2003). In doing so, the infants can ‘tell’ their caretakers what they want. The innate impulse makes the infants imitate the sounds and aspects of the language spoken around them (Ingram 2003). Hence, both the inner motivations and the need to socialize make children babble. Therefore, it can be said that babbling is an evolutionary process through which infants are programmed to communicate.

The infant babbling studies show that infants mirror the sounds and the intonation, rhythm, and syllable pattern of the native language. The similarity found between babbling and the language is spoken around the infant shows that babbling is not just a mouth play but is an essential aspect of language acquisition.

Impact of Age Diversity: A Review of a Newspaper Article

Why visitors still make use of to read news papers
when in this technological world all is accessible on net?

I’m having a small issue I cant get my reader to pickup your feed, I’m using google reader fyi.

When I look at your website in Safari, it looks
fine but when opening in Internet Explorer, it
has some overlapping. I just wanted to give you a quick heads
up! Other then that, fantastic blog!