Rome is known for its rich religious tradition, but its splendid artworks spread throughout the city. Visiting Rome is similar to getting in touch with the finest artists the world has ever known because, in every corner, there is art and beauty crafted by the best artists in history. Three main attractions offer a heaven to every visitor: The Piazza Navona, Trevi Fountain, and Piazza di Spagna.

One of the most beautiful places to visit in Rome is Piazza Navona. According to history, this place was initially built for athletic meets and chariot racing. It now hosts a variety of elegant cafes and Baroque palaces, offering tourists a warm Mediterranean welcome. At the center is the Saint’Agnese in Agone. This church illustrates the religious beliefs of the people. Three lavish fountains adorn the piazza, namely Fontana del Quattro Fiumi, Fontana del Nettuno, and Fontana de Moro. These fountains make the view appear romantic and mysterious in the early morning but exciting and spectacular at night. There is entertainment and art everywhere as artists gather to dance, paint, sing while vendors sell souvenirs to newcomers. 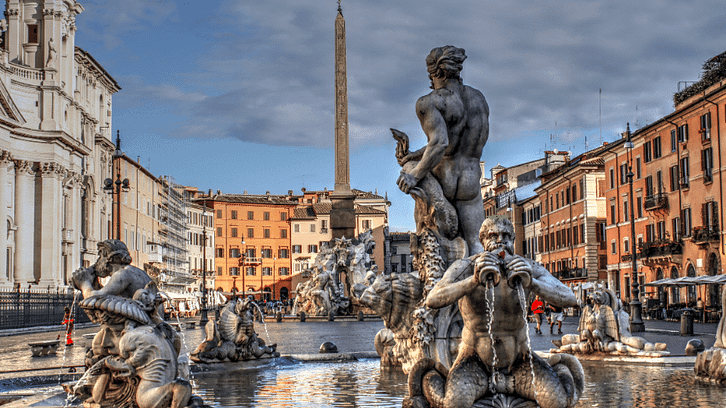 The grandest of the three fountains is the one at the center, Fontana Dei Quattro. This fountain attracts the passersby’s attention because of the enormous sculptures in the middle, surrounding an obelisk. Gian Lorenzo Bernini designed this fountain in 1651 for Pope Innocent X, whose family palace faces the piazza. The sculptures make the fountain look mysterious. They consist of four river gods representing the Nile River of Africa, Danube River of Europe, Ganges River of Asia, and Rio de la Plata River of America. The sculptures take different dramatic poses, each bearing muscular limbs and facial expressions highly characteristic of Baroque art. According to history, constructing the said fountain was tough because people opposed using public funds for it as they suffered hunger. They vandalized around the area, expressing their sentiments, so there was a need to patrol the city during its construction. Today, however, the fountain serves as an essential legacy of art and tourist attraction.

Fontana del Nettuno, or Neptune Fountain, is located at the piazza’s north end. This fountain was designed in 1574 by Giacomo Della Porta and sponsored by Pope Gregory XIII. The fountain is composed of a basin made of white marble and on top are mythological Nereids or sea nymphs and the god Neptune wrestling with an octopus.

Overall, the three fountains in the Piazza Navona are antiquities that show the craftsmanship of the Romans. The piazza, with its unique and precious landscape, maybe unparalleled for its beauty. Notably, however, the subjects of the sculptures are all male. This represents the dominance of the male figure in the Renaissance, and the aristocracy in turn, as they had access to education and the arts.

The cost of materials used to construct the fountains reveals the elitist view of both the church and the government. The said fountains now serve as legacies of art, but at the time they were constructed, the ordinary people did not have enough to eat. Thus, they resisted the construction of the Fontana Dei Quattro. In response, the government was after prestige and power. Therefore, it held a hard look at the doubts of the people. In many works, the Renaissance people lavishly proved their great taste in art, which later earned them prestige and praise.

The Piazza Navona strictly conforms with High Renaissance requirements of drama, physical presence, and balance. In particular, the facial expressions and hand gestures of the statues in the three fountains exhibit these characteristics. Likewise, the addition of figures in the Fountain of Neptune to equate those in the Fountain of the Moors shows the high need for balance and order of the earlier Romans. Moreover, the windows in the buildings and the balanced space devoted to the walkway also confirm the accurate idea of physical presence and balance among the Romans.

Another major attraction in Rome is the Trevi Fountain. This fountain is gigantic, measuring 26.3 m high and 49.15 m wide. The fountain is mostly made with travertine stone and is situated at the junction of three roads or the vie, thus ample space is given for viewers to see. It is unique mainly because of its backdrop, the Palazzo Poli. The Trevi Fountain is famous for coin throwing, and it is said that a visit to Rome is not complete without throwing coins and wishing at the fountain. When throwing coins, one is supposed to do it with the right hand over the left shoulder. 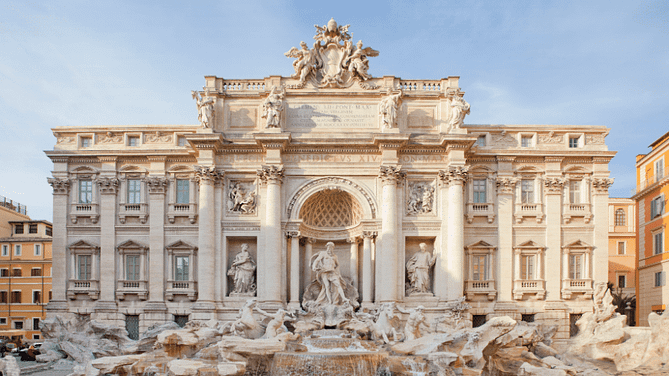 Designed originally by Alessandro Galilei and constructed by Nicola Salvi in 1629, the Trevi Fountain consists of several figures added to the original design by different artists. Before the fountain was finished, Salvi’s death could be considered a blessing in disguise as it gave way for other artists to provide their contributions. In particular, Pietro Bracci, who completed the fountain, set his primary input in the center, the statue of Oceanus, the god of all waters. Two Triton chariots carry the god, symbolizing abundance and health. At the same time, other figures occupying the palazzo scene also adorn the fountain and add to the people’s curiosities.

What I like most about the Trevi Fountain is the sight of hippocamps being tamed by the Tritons. The view of these creatures adds to the mystery and meaning of the scene. The reactions of the horses further create drama and motion to the waterscape. Likewise, the Palazzo Poli, which serves as a backdrop, suggests not just the taming of the water but also the human force against nature’s will.

Baroque style is dominant with the gigantic figures that express drama and spectacular themes with the use of space and symbolic gestures of the data. The bodies of models are muscular and stout, adding to physical presence and drama. Oceanus has a long and abundant beard that adds to the fierce and majestic look. Notably, the figures are clothed, thus showing deviation from early Renaissance art.

It should be considered that along with religious ideologies, the depiction of the gods also promotes the prestige of the artists and the commissioners of art. Depicting the gods was required of the artists; it was their only choice because if human figures were depicted instead, there would be less drama and imperfect physical form. Up to this day, the Roman sculptures are still held in high regard despite their irrelevance to the pressing problems of our time because they elevate our feelings and let us experience the beauty that is out of this world.

With its depiction of gods, the Trevi Fountain is illustrative of the religious ideology of the time. The figures denote the high regard that the earlier Romans gave gods and other divine beings. In part, the fountain could be a reminder for pagans or atheists of the power of gods or divine beings, although such concepts negate the teachings of the Catholic Church.

Drama, physical presence, and balance are strictly employed in the design of the Trevi Fountain. In particular, the backdrop helps to establish all these elements. In addition to the gestures, there is more drama in the concept of gods ruling the government. Physical presence is achieved with the chariot and Oceanus, making Bracci highly successful in obtaining beauty. Balance is also reflected in the Palazzo Poli’s presence, whose panels and balconies contain elements and figures in balanced positioning.

From the name itself, one can derive the purpose of the Plaza di Spagna, which is to house the Spaniards. Its features include the Spanish Steps, the church of Trinita Dei Monti, Fontana Della Barcaccia, and Palacio Propaganda Fide, which was also designed by Gian Lorenz Bernini, and some famous statues to adorn the square.

Looking from the ground, viewers will be impressed by the Spanish steps’ design, a 135-step staircase in front of the Church of Trinita Dei Monti. The staircase was designed originally by Francesco De Sanctis but was commissioned by Alessandro Specchi. Used to connect the church to the square, the Spanish Steps could symbolize the way to redemption/heaven, which could be a long road to travel. Elevated 135 steps from the ground, the Church of Trinita Dei Monti looks like a sanctuary or refuge for lost and troubled souls.

At the foot of the Spanish Steps comes the Fontana Della Barcaccia, a fountain designed by the famous Gian Lorenzo Bernini and his father, Pietro Bernini. This travertine-made fountain resembles an old boat that reached the piazza during a flood in 1598. From the square, the basin could be a reminder for people to wash away sins before giving praise to god.

On the southeast part of the piazza, one can find the Colonna dell’ Immacolata (Column of the Immaculate Conception) erected in 1857 to commemorate the Church dogma regarding the Immaculate Concepcion, which was approved two years before the election. This column is now topped with the image of the Virgin.

The view from the church down to the square is the best view of the place for me. From outside the church up the Spanish Steps, one can see the busy square and people gathered near the fountain and even on the steps. Looking down from there, one could have a bird’s eye view of the place, a concept similar to how god watches over us.

The people’s religiosity is what the whole piazza reflects, with all the religious landmarks in the area. Nevertheless, the use of space also illustrates the practicality of the builders as they maximize every little space in the piazza. There is no empty or boring spot in the square that could give a contrasting view of the architects.

Most of what can be seen in the Piazza di Spagna is reflective of the religious ideologies of the people. Each of the landmarks seems to portray a role in the “heaven and earth platform.” Heaven is represented by the church, while the steps are the hereafter with the fountain that serves as a basin to wash away sins. Palacio Propaganda Fide and other iconic structures near the square serve as the universe, with its busy people and shops.

Physical appearance and balance were worked on in this piazza. The staircase composed of 135 steps is wide enough to house hundreds of visitors who wish to either sit on the steps or climb the top. Likewise, physical aesthetics are given importance with preserving old palazzos, especially their color and style. Balance is present with the museum dedicated to John Keats, at the right corner of the steps while Babington’s tea room occupies the left side. The Fontana Della Barcaccia, which is located in the middle of the square, also helps to establish the center, thus giving tourists a better view, especially from above.