Obesity is often considered a matter of character rather than a matter of health. According to Haddock (2000), “Obesity is often taken as a sign of personal failing…Even though about one-third of the population is overweight, and the causes of obesity are not associated with personal character, the stigma against the obese remains” (p. 124). However, in studying the nature of obesity and its primary causes, connections to addiction can be observed. With overeating becoming more clearly associated with addiction, it is clear that the nature of treatment should be medical, not based on shame. One of the disorders associated with overeating can be observed through binge eating disorder (bed). This eating disorder is defined through several criteria that place the eater in a frequently vulnerable state of uncontrolled eating. Through an examination of a case study and in evaluating the patient for the abnormalities associated with their overeating, treatments through both drug therapy and non-pharmaceutical therapies can help to regulate their condition. 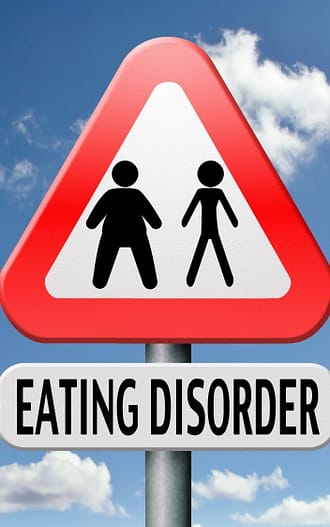 Relationships between food and addiction have been created through connections to other forms of addiction. Tobacco addiction can lead to a loss of weight as can addictions to drugs. In trying to avoid relapse towards alcohol abuse, Alcoholics Anonymous has recommended to their members never to allow themselves to “get too hungry” (Gold, 2004, p. 2). When addicts are treated for their addictions, it seems to lead the addicted towards weight gain. Therefore, there is some speculation that there is a connection between food consumption and the pathways in the brain towards addictive behaviours. Overeating can be termed as an addiction of its own because “The ‘symptoms’ of the disease include perceived loss of eating control, cravings, preoccupations with food, and sometimes denial and secrecy. Overeating is alternated with restrictive dieting, and eating is used to regulate emotions and cope with stress like the use of psychotropic drugs” (Haddock, 2000, p. 125).

One of the problems with trying to find a way to regulate an addiction associated with overeating is that, unlike other types of substance abuse, an individual cannot completely stop eating to rid the body of the offending problem. An alcoholic or a drug user can work towards eliminating the addiction by stopping the behaviour. However, an overeater must find a way to continue eating without indulging the addictive behaviours that are associated with the disorder. Also, there are some types of substances in food that can be identified for their unhealthy nature, but also for their ability to affect mood and stress. The core substance that causes addictive behaviours is sugar.

Pekarek (2007) describes the effects of sugar and its addictive properties by stating “You may have suffered for days without sweets, but one bite puts you over the edge and back into the cycle of eating uncontrollably while trying to satisfy those sugar cravings” (p. 5). She further explains that “Processed sugar keeps your appetite in high gear, keeping you constantly hungry” (Pekarek, 2007, p. 5). DesMaisons (2002) describes sugar addiction as a part of a more difficult problem which is defined as sugar sensitivity in which the body is more sensitive and reactive to imbalances which will “create cravings, mood swings, erratic energy, and sugar addiction” (p. 11). Using the addiction-as-disease model for BED, the concept of the disorder is defined by the introduction of white flour and white sugar as a small child, triggering the addiction. Using the auto-addiction opioid model, “chronic eating disorders may be conceptualized as an addiction to the body’s endogenous opioids, specifically the endorphins” (Rubin, 2007, p. 19). In the same way that an athlete engages endorphins which give a sense of pleasure from the exertions of exercise, the overeater engages the endorphins from the act of binging through the interactions of the sugar in the brain.

Binge eating has components that are based upon both impulsive and compulsive actions. Treatment that addresses both of these components can be obtained through a combination of pharmaceutical and therapy options that can address the different aspects of the problem. Impulse control issues can be observed through increased shoplifting behaviour that is often observed in higher incidents in those with eating disorders than the general population (Berg, 2002).  Additionally, Ritsner (2009) discusses that connections can be made between bipolar disorder and type II diabetes in relationship to BED. One of the pathology differences between BED and bulimia is that self-esteem is not associated or constructed as an investment in body shape and size. Sleep disorders and night eating syndrome (NES) in which the majority of the calories consumed for the day occur at night are also associated with BED. While anorexia nervosa has been recognized since the 19th century, overeating disorders have only been recognized from the 1950s, thus leaving “diagnosis boundaries within the eating disorder spectrum…fuzzy…Also there is overlap at the edges with developmental disorders, personality disorders, and axis I disorders” (Ritsner, 2009, p. 228).

Berg (2002) developed a case study about a patient she named ‘Anne’. Anne developed BED after the stressor of ending a relationship. She began obsessing about food, waking in the middle of the night with powerful cravings. To satisfy her cravings, she would resort to stealing her roommates’ food when she would restrict her supply of food to try and control her eating issue. She also began to severely restrict her food intake during the day when she seemed to have more control. Her lack of control seemed to be centred during the middle of the night, her ability to have self-control thwarted by an impulse that she could not identify. Sleep disturbance is a factor in eating control when “nocturnal waking places affected individuals in a situation of sensory deprivation where eating impulses are difficult to control since there is limited opportunity to use techniques of distraction” (Berg, 2002, p. 14).

In assessing Anne through the Mental Status Exam, her binging behaviour is emphasized by her appearance as she has had little sleep during the period before seeking medical help. Her through processes show that she is substituting her thoughts about the event of the ended relationship with thoughts about food. She is obsessing over her consumption, thus not thinking about the stress factors that began her binging. She feels ‘out of control’, her life, her eating, and her relationships not monitored by her own will, but by the addiction of needing food above all other considerations. Anne’s intellectual functioning was not affected, but her ability to focus was distracted by her addictive behaviours. During the day, her sensory functions were fine. Still, at night when her cravings awakened her, her sensory capacity was diminished, allowing her cravings to override her ability to maintain control. Anne is suffering from an Axis I disorder with features of depression, anxiety, and the eating disorder.

To date, the best pharmaceutical approach to BED is the use of the anti-depressant desipramine, with the name brand Norpramin. In 63% of those in a study done to measure the effects on binge eating, the disorder decreased, wherein 13% for of those on the placebo binge eating increased. Rapid relapse was observed in those who were then taken off of the drug after 12 weeks of treatment (Nathan & Gorman, 2007, p. 598). To effectively treat the nature of BED, it appears that the first step would be to establish drug therapy through the anti-depressant Norpramin. Potential side effects of the drug can include rapid heart rate, seizure, headache tremors, nausea, urination decrease, skin rash, vomiting, constipation, and sleep problems (RX List, 2011).

Treatment should also include a dietary program in which proper nutrition and balanced food intake are established. Where this addresses the physical needs of the patient, addressing the habits of the patient through cognitive-behavioural therapy will help to establish better patterns within the patient. Through the use of talk therapy, the patient can discuss their feelings, exploring how the addictive behaviours associated with binge eating can be addressed. As well, goal-oriented progress can be established and measured to see that the causes of the binge eating are managed through coping skills and by using tools to move through the periods that might have otherwise been causing for indulging in the binging behaviours. The nature of the disorder is defined by the ability to move beyond the immediate, towards the success of the future. The tools provided during cognitive behavioural therapy sessions can help the patient to find means through which to manage the behaviours that have been previously controlling his or her life.

Binge eating disorder or BED is characterized by the social implications that oppress the afflicted, the physical consequences of carrying too much weight, and the health consequences associated with diabetes. The nature of the addiction is such that abstinence is not an option. However, eliminating the worst offending resources of addiction such as white sugar and white flour will provide some relief from the impulses that drive the affliction. In addressing the disorder, two aspects, both the physical and the mental, must be part of the program. Drug therapies of anti-depressants combined with cognitive-behavioural therapy, can help to break the addiction of binging.

Understanding the nature of addiction and how eating disorders fall within the boundary of addiction diagnoses will help to more effectively treat patients who are suffering from an uncontrollable compulsion to eat. Where this problem is often treated as a social problem or a problem related to the character of the individual, understanding that it should be treated through medical and psychiatric methods will increase success with these patients.

Having read this I believed it was really enlightening.
I appreciate you taking the time and effort to put this article together.
I once again find myself spending way too much time
both reading and posting comments. But so what,
it was still worth it!