Eczema is a primary disorder of the skin with multiple causes and associated symptoms that require targeted therapeutic approaches. This paper aims to review the most common types of eczema, their causes, and the types of treatments that are most useful in the management of this disease. The sources used to prepare this paper were relevant medical journal articles written by specialists in dermatology and involved clinical patient studies on this disease’s parameters and the most appropriate therapeutic and preventive approaches to disease management.

These studies have led to the conclusion that eczema is a complex set of diseases with inflammatory components that may occur as a consequence of allergic reactions or direct or indirect effects of environmental substances on the skin epithelium. The range of severity of the disease is broad. The causes are multiple and complex, and treatment approaches involving immunosuppressant and pharmacologic anti-inflammatory agents must be tailored to the type of eczema and its clinical severity each patient. 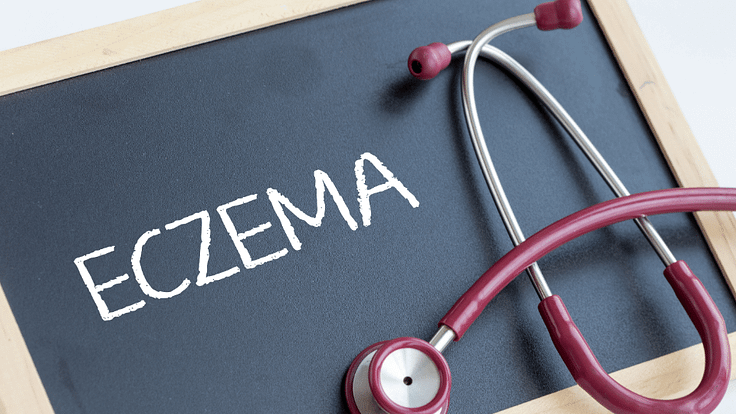 Eczema is an inflammatory skin disease, which may involve several forms of inflammatory epithelial disorders in its broadest sense (Novak et al., 2003). Most of the symptomatology of eczema is associated with redness, itchiness, and rashes located on the skin. Eczema may occur on any part of the body. When it is caused by contact dermatitis, the exposed area is the site where eczema develops. In allergic forms of eczema, the most common exposure areas are th underside of joints, the back, the head region, and the buttocks. Persistent rashes may become crusty and inflamed, resulting in discharge and secondary bacterial infections (Novak et al., 2003).

Different types of eczema are generally classified based on the site of occurrence on the body, the type or appearance of the lesion, or its underlying causes. The most common type of eczema is called atopic eczema (Novak et al., 2003).

Other rare types of eczema can occur (McNally et al., 2001). These include dyshidrosis, also called “housewife’s eczema” which is a form of the disorder that occurs on the hand’s palms, between the fingers or on the soles of the feet and between the toes. It is associated with very uncomfortable itchiness. This form of eczema is generally more severe during warm summer months. Discoid eczema occurs in the form of a rash of round spots that most commonly occurs on the lower legs. It is of unknown etiology. Venous eczema is the result of circulatory disorders that block the flow of oxygenated blood to the skin. The most common site of occurrence is the ankles, and the rash may be associated with edema. If untreated, the disorder may result in ulceration of the legs. Another rare form of eczema is called dermatitis herpetiformis. This disease is frequently observed in patients with celiac disease (the inability to digest gluten) and results in a rash that affects the arms, legs, and back. It is alleviated through dietary control. Neurodermatitis or localized scratch dermatitis results from scratching the skin or rubbing to produce an itchy, pigmented lesion.

Autoeczematization is a form of eczema that results from infection either by bacteria, viruses, or parasites that secondarily affect the skin. Thus, there are many types of eczema with many different causes and clinical presentations that depend on the underlying cause of the skin lesion (McNally et al., 2001). Many treatments have been developed to treat eczema symptoms, although the underlying disorder is often difficult to cure (Hoare et al., 2000). Moreover, many preventive approaches may help to prevent its occurrence in susceptible individuals.

Corticosteroids are the first-line treatment for eczema since they can be highly effective immunosuppressants that alleviate the disease’s inflammatory components (Hoare et al., 2000). The types of corticosteroids commonly used in treating eczema include hydrocortisone, fluocinonide, clobetasol butyrate, among others. The type of corticosteroid prescribed depends on the severity of the symptoms associated with inflammation, such as redness, rash itchiness, and other topical symptoms.

It is necessary to use corticosteroids judiciously, however, as they are not curative of eczema and may have significant side effects (Hoare et al., 2000). Topical corticosteroids may cause a thinning of the epidermis, which may result in a secondary infection. High topical steroid use has been associated with hypothalamic-pituitary-adrenal axis suppression. The steroid may be absorbed by the skin to produce systemic effects on organ and immune system function.

Secondary infections may also result from their use as a consequence of their generalized immunosuppressive effects. Long-term therapy for eczema using topical corticosteroids is generally not advisable for these reasons. Instead, these agents should be used to treat acute eczema and followed by long term maintenance using other types of therapeutics such as emollients. Severe eczema may require the use of systemically administered corticosteroids (Thestrup-Pedersen, 2002). The most commonly used oral and injectable steroids are prednisolone and triamcinolone.

These pharmacologic agents are intended for short-term use only to treat cases that do not respond to topical corticosteroids and should be discontinued once the disorder is under control. The side effects of systemic corticosteroids may include general immunosuppression, which is a risk factor for many human diseases (Thestrup-Pedersen, 2002). Immunomodulators such as pimecrolimus and tacrolimus represent another class of topical pharmacologic agents used to treat eczema (Hoare et al., 2000). These drugs were developed for use in place of corticosteroids. Their use may produce good results in localized lesions. Still, recent clinical trials have indicated their potential association with certain forms of cancer such as lymphoma or skin cancer resulting from their use. On this basis, the US Food and Drug Administration (FDA) issued a public health advisory, severely limiting immunomodulators’ use to treat patients with eczema (Thestrup-Pedersen, 2002). Physicians continue to report good results without a significant association with increased cancer risk associated with these drugs.

They may also cause anemia due to their effects on blood cell proliferation. They must be used very cautiously in this group of patients whose eczema is refractory to other treatments (Hoare et al., 2000).

Emollients anti-histamines are frequently prescribed to lubricate the skin and provide relief from itchiness, which is not only extremely uncomfortable and even painful but may also exacerbate the skin condition resulting from excessive scratching of the affected areas (Oranje et al., 2002). Anti-histamines such as Benadryl or Phenergan that also induce sedation are generally most effective in controlling itchiness. The lubricating emollients not only provide comfort but may reduce the occurrence of eczema due to their protective effects on epithelial moisture. The natural oils of the skin help control eczema, and the use of emollient creams may enhance this protective effect, particularly in types of eczema associated with dry skin (Oranje et al., 2002). Examples of emollient creams include Lubriderm, Oilatum, and Balneum. It is also important to note that soaps and detergents can exacerbate eczema symptoms and should be avoided by individuals with this disease.

Forms of eczema resulting from allergic reactions may be controlled by avoiding contact with the causative allergen(s) if this can be determined. Common environmental allergens may cause eczema in sensitive individuals (Oranje et al., 2002). These include dust mites, household chemicals, and chemicals found in carpet and furniture. Research studies have also suggested that food allergies may be an essential cause of eczema, particularly in children and infants (Oranje et al., 2002). Among the essential sources of food allergies are milk and other dairy products, soybeans, eggs, nuts, and wheat products. Avoidant approaches to preventing eczema may be the most appropriate therapeutic modality in these cases (Oranje et al., 2002).

In conclusion, eczema represents a group of skin conditions with multiple causes and varies significantly in the severity of associated symptoms. Eczema is classified based on the type of lesion, its location on the body, and the underlying causes. The common thread uniting all forms of this disorder is that they affect the skin’s epidermal layers. Treatment approaches include the use of pharmacologic agents that suppress the disorder’s inflammatory components and systemic approaches that involve the selective avoidance of allergens or other substances that may induce the formation of lesions or exacerbate the condition. Each patient with eczema is unique and requires a thorough assessment by a qualified dermatologist to identify the type of eczema, the most appropriate treatment, and the development of strategies that may reduce the occurrence and severity of this debilitating condition.

Analysis of The Reasons: Why Google is Making us Stupid