Officially, the recession in the US commenced in December 2007. Slump can be defined as the decline of Gross Domestic Product (GDP) in three successive quarters. As per the record maintained by the National Bureau of Economic Research’s Business Cycle Dating Committee, the recession was officially declared to have ended by June 2009 (Reddy cited in Hall). There did occur a baby recession period in the US in 2001, though the actual recession happened in 2008 and 2009. This was the most severe form of the economic downturn that the US had experienced in decades. A vast majority of industries in the US were affected by this economic recession. The US could not find any way to escape the economic downturn when the whole world had wholly soaked in it. The circumstances took a fortunate turn in the last three months of 2009, and the economy began to grow and become strong, though the graph soon took a downward turn, specifically in the latter half of 2010, when the growth of GDP in the US fell to 2 percent. “The federal stimulus money that has added at least 1% but likely 2% or more to the GDP growth will be winding down, and that could put at least as much of a drag on the economy as the boost it gave” (Hall). 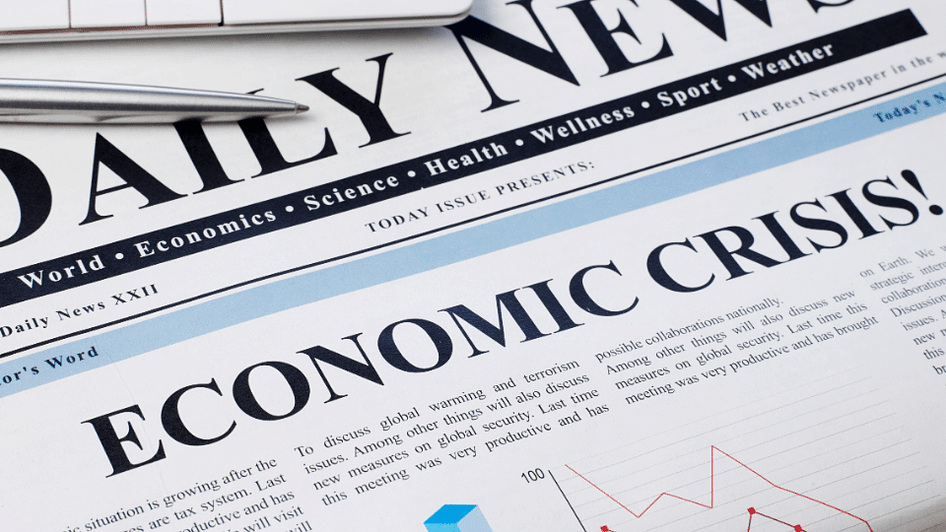 When the recession was at its apogee, the years were full of pain for many Americans because they had lost jobs. According to an estimate, as many as three-quarters of a million jobs were being lost every month in the US in the years of recession (Bureau of Labor Statistics”). The rate of unemployment in the US reached 10.2 percent by October 2009. Since then, it has shown a slight decline and has reached 10 percent. Before the stabilizing, the US’s  US’s unemployment rate is expected to go up to the end of 2011.

A loop of negative feedback was introduced by the economic recession, which is expected to keep dragging the US economy for a while shortly, even though the economic downturn has mostly declined. Some of these loop components are a high unemployment rate, the unemployed’s inability to pay their mortgages and bills, and weakened wealth from loss of equity. People in the US are suffering from a lack of income. Their lowered financial status is causing them to save more and spend less. Owing to the credit’s tightness, people in the US are finding it hard to purchase homes or establish new businesses. As a result of the declined consumer spending, firms have lowered their production to improve their efficiency. Many US companies have downsized in the past two to three years, and the rate of recruitment has declined accordingly. US government has shown a similar trend. The value of the property has steadily gone down along with the property tax revenues. Thus, the sales have been lowered together with the sales tax revenues. Owing to the reduced incomes and a lot of losses, income taxes have been dropped.

On the other hand, the US government is spending much more than ever before to cater to the unemployed’s needs. This has caused the US government to increase the payable fees as well as cut back services. As a result of this, governmental contracts and government employees have reduced in number.

The Federal governments have plunged into the scene in a very aggressive manner to distort the loop of negative feedback. The Federal governments aimed to minimize the downfall of the global economy so that the negative feedback circle would be reversed. However, due to the massive spending and increased involvement in economy, the US government now feels the need to retract itself so that the debt that has thus been incurred could be paid back. This can be easily achieved if the US economy continues to grow like it did increase by 5 to 8 percent after the end of the economic recession. However, it is essential to realize that the economy’s recovery does not occur in a V-shaped pattern. Instead, the economic recovery is likely to happen in a U shape or an L shape, thus making a recovery slower.

““House prices fell between the fourth quarter of 2009 and the fourth quarter of 2010 in 98 of the 100 largest metropolitan areas” (Will). Florida is among those states that have the worst property bubble in the US. Florida will take too long to have the housing market recovered. In the past, people used to let go of the house into foreclosure. This trend has become obscene now, and people tend to go delinquent upon the mortgage before it can be negotiated upon by the bank. It is expected that the market of housing in Florida will be a considerable blow to the economy shortly. In addition to that, several other factors are also there to weaken the economy that includes but are not limited to consumer credit, student loans and real estate. The resulting weakening of the economy will cause unemployment to rise, and Florida will keep suffering from the consequences of the economic recession for quite some time in the future.

Unemployment has dramatically affected a common man. Unemployed people do not have the option of moving over to better cities. Most people have long kept the search for a job and have resorted to accepting anything that has come in the way. Few people have established businesses of their own, though on a small scale. This is not consistent with the demand of the circumstances resulting from the economic recession. Therefore, many people had reverted to schools to increase their education and enhance their career competence. This has been seen as a viable option because it has provided people with an excellent justification for a break from the job and has enabled them to seek better jobs after the economic recession. In addition to that, it fills the gap created by the lack of employment in the resume.

This is a far better solution for most people than having a massive gap in their employment record explained on a résumé – including establishing that the missing time was not spent in rehab or as an incarcerated guest of the state. (Hall).

People who have higher degrees can acquire better-paying jobs than others that terminate their education at a lower level. According to Mankiw, history gives evidence for an additional $10000 per year of teaching after graduation. Many people do not manage to get jobs after completing their Bachelor’  sBachelor’s degree. This is one reason why people continue their education after graduation. Like Sasso, some researchers believe that the job market will be worse for the graduates in the next five years.

Unemployment in the US will be continued for several years in the future. The only realistic option for many Americans struggling from the impact of the economic crisis and are currently unemployed is more training and education. The hard reality is that the loss of productivity of a person-year or a woman-year to the US economy is any year that a person loses jobs. It is not a smart idea to wait for the missing job to be recovered. It is possible to open up more positions by causing the baby boomers to retire. By the year 2020, due to baby boomers’ demographics, the world will face significant labour shortages.

““The Great 2007–2009 Recession was the worst economic downturn since the Great Depression.”” (Hughes and Seneca 1). The economic recession, which started in December 2007, has generally brought many pains for many countries globally, and the US in particular. However, it has also done considerable good to the world in that it has dawned on the loopholes of the conventional wasteful and obsolete business models upon people.

It will allow the regulators to catch up with all of the people misbehaving; the wasteful and greedy unethical ones that helped fuel the bubbles led to such a massive collapse of the housing and complicated financial instruments over-inflated asset valuations. (Hall, 1).

After the economic recession has been worn away, the companies and the government’s most significant issue is sustainability. After the end of the economic downturn, efficiency and sustainable development have become the primary success criteria. Business people face the challenge of establishing such businesses that would be sustainable as well as environment friendly. This is a big challenge, significantly when the market scenario has been dramatically affected by the economic recession. The economic downturn has caused a lot of trouble for a common man in America, and the sufferings are expected to sustain for some time in the future.