After all those years of waiting, it’s finally here. Probably the biggest and most awaited remake in gaming history is finally in front of us… kinda. One of the most important, iconic, and popular RPGs ever made finally comes back, for a modern audience. There are plenty of considerations taken in this title to make it fitter to the modern gaming industry.Even with how popular the original game is if the remake had been an exactly 1 to 1 recreation of the original game but with new visuals, it would have shown its age. Having mentioned that, reviewing this title is really tough without letting oneself go with nostalgia.While it’s true that it’s been more than two decades since the original game released, we’ll try not to spoil the game here. So now, join us in this adventure through the revival of Cloud Strife’s adventure in Final Fantasy VII Remake. 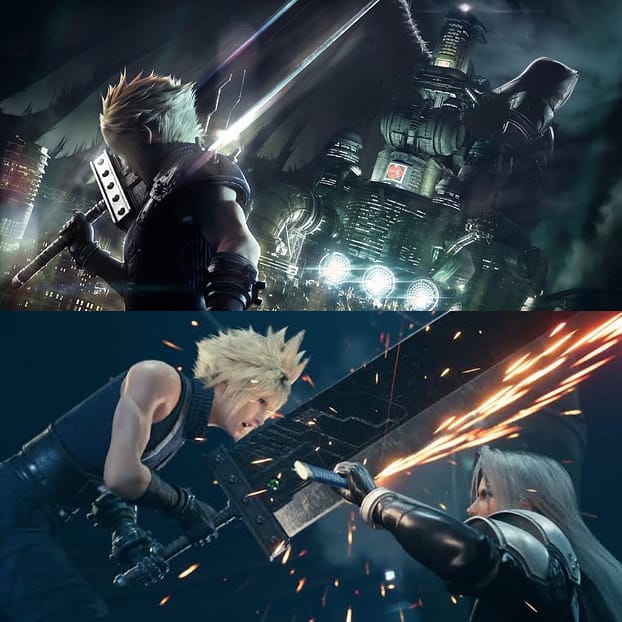 Final Fantasy VII Remake is completely made from zero, in fact, it was re-done multiple times during its development. And since it’s made from scratch, the game has all kinds of new features to make it more modern and make it fit with the current generation, not only of consoles but also of gamer. Just as it happened back in 1997 when the original game was released, the Final Fantasy VII remake also revolutionized the RPG industry in many ways. And while most of them are for good, some are terribly controversial and troublesome.

The game looks just gorgeous, it really does. Final Fantasy VII Remake is visually a masterpiece in every way. The character designs are incredible, and even the world is so lively and well built. The visuals are similar to those of Final Fantasy XVI, but with a more unique art direction directly inherent to Final Fantasy VII. The animations and whole cinematography of the game are taken to a completely new level. It’s truly amazing to see that now this game looks even better than the FMVs we used to get in the older Final Fantasy titles. It’s pretty much like a playable version of Final Fantasy VII Advent Children. However, here we have to be completely honest, and while the visuals and cinematic are amazing, not all that glitters is gold. There are plenty of issues in the game when it comes to putting all these individually–beautiful aspects together. When you’re playing the game, the interaction between our characters and their scenery is pretty much null. The clear graphic difference between the playable characters and the NPCs break the illusion. You can even run against them and absolutely nothing will happen, not even the slightest reaction, they’re just there, merely existing.

Not only are the NPCs like living statues, but the world design can be pretty inconsistent, even with how beautiful it looks. It’s clear how some places have much more effort into making them than others. You’ll find tons of completely locked doors, corridors that will seemingly lead to a different location but they don’t, locked places with nothing locking them, and more.While most aspects of the game look beautiful, it starts falling a little apart when you put them all together. But that’s not a complete deal-breaker, so don’t worry about that. However, it can be pretty annoying if you’re coming from FFXV, where the world looks beautiful and interactive. It’s a pretty respectful representation of what the original game would look like if released today. It has some issues here and there, but it’s a mostly pleasant experience visually.

This aspect changed a lot from the original game into the Remake. It’s simply an enviable, completely new title with the exact same gameplay as a game from 1997. It would feel outdated and dull, especially when you’ve changed the visuals so much. The game has a much more fluid combat mechanics, once again similar to those in the most recent Final Fantasy games. Sure, there’s still no Final Fantasy Dissidia, it’s a strategy RPG, but it’s much faster, and less turn-based than the original game. It never feels like an old game, and that’s what you should be aiming at when making a Remake. Take the Remake part out of the title and it could easily pass as a modern title. They also included tons of extras into the game to make it bigger and longer than the original… in some ways at least.

Final Fantasy VII Remake is a pretty interesting game, but it makes many questionable decisions. While it keeps the same spirit as the original title, there are just too many changes to make it the same game. And this goes all the way in every aspect of the game. Possibly one of the most controversial decisions was dividing this game into an episodic form factor. That means that this is just the first part of the game and not the full story. What you get here on this first part is the equivalent of about the 6-7 first hours of the original game. Sure, with the extra missions and expanded story it converts into around 30 hours of gameplay in Final Fantasy VII remake. And believe it or not, it’s highly recommended that you lay the original game before jumping into the remake, and we’ll explain why here.

As you’ve probably heard everywhere on the internet, the game is not really a remake of Final Fantasy VII. It’s more of a word used to describe the game itself. The story is different from the original game, and it kinda takes place in an alternate reality, but we won’t spoil much more than this. However, if you really want to understand everything about this game, you should play the original first. END OF THE SPOILERS.

This is an excellent title, with great visuals, improved gameplay, and expanded story. While it’s not the full story of the game yet, it’s a nice first step. It sure can be annoying the lack of content available, but what we got is well made. The combos in the fights and the rest of the new mechanics are well implemented. While it keeps the spirit of the original title, it is pretty much an entire game on its own, and shouldn’t be considered an alternative to the original game. Right now you can only play this game in PS4 and PS4 Pro, but it will be available for PC and Xbox One next year. The exclusivity deal with Sony has a deadline of October 4th, 2021. So, if you’re a PC or Xbox One gamer, you’re gonna have to wait a ridiculously long time to play. Who knows, maybe the second episode of the game will be available by then. At the time being, the game is great but feels incomplete. Looks great, but has some issues there too. Overall is a great game, but it probably isn’t at the same level of innovation as the original version was back in 1997.

For women 50 at the time of diagnosis, there were 29 cases among participants randomized to Neophedan tamoxifen citrate compared to 12 among women on placebo RR 2 how much does cialis cost I ve tried everything for years to fight my every night leg cramps