Smoking is a significant problem in all parts of the world because of the severe health problems it can cause to smokers and the individuals who are forced to breathe secondary smoke. No studies have ever proved any benefits associated with smoking, but numerous studies point towards the adverse effects of smoking. However, among adults and adolescents, the smoking habit is rising day by day. Males were previously the influential group that gained gratification from smoking, although many females have also established smoking habits at the moment. This paper outlines three main facts associated with smoking to convince smokers to get rid of their smoking habit.

In an article by Amina Khan, “Joe Paterno has lung cancer: What are the risks?” Published in the Los Angeles Times on November 18, 2011, former Penn State football coach Joe Paterno mentions the reasons for lung cancer caused. Recently, Joe Paterno was diagnosed with a treatable form of lung cancer. She pointed out that never before had Paterno been remembered as a smoker. In her opinion, a history of smoking is the most common risk factor for lung cancer — even though a patient stopped decades ago. It is not uncommon for patients to quit and think they are no longer at risk (Khan). The association of cancer with smoking has also been reported by Brizer (2003). “German studies have shown that cancer is linked with smoking” (Brizer, p.21). 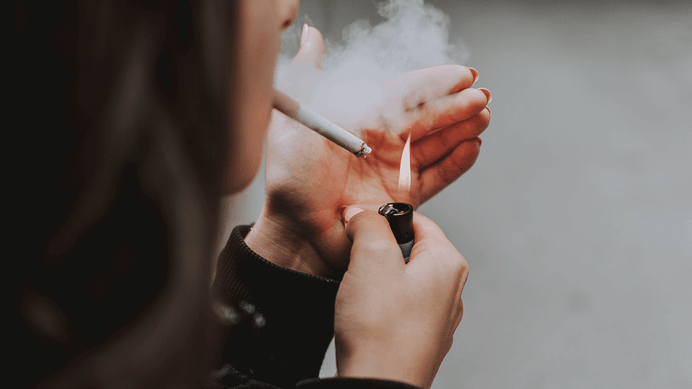 While smoking can cause various forms of physical illnesses, such as heart attacks, tumours, cough, etc., the most harmful smoking-related disease appears to be lung cancer. It is estimated that tobacco contains more than 4,000 chemicals that the smoker and the secondary smoke breathers can cause different conditions. Some of the harmful chemicals in cigarette smoke are ammonia, arsenic, carbon monoxide, and benzene. Out of these 4000 chemicals, 43 can cause cancer disease. 86% of all deaths caused by smoking are due to lung cancer (Smoking, Cessation).

According to a study designed to assess the prevalence of smoking at the time of lung cancer diagnosis in a surgical patient cohort referred for cardiothoracic surgery, conducted by Mong et al. (2011),

The above statistics establish a direct association between smoking and lung cancer. Since the smoke swallowed by the smoker goes directly into the lungs, the chemicals in tobacco smoke affect the lungs more than any other parts of the body.

Public places are used extensively by smokers, and therefore, innocent people may also be forced to breathe secondary smoke, which is as dangerous as smoke swallowed by the smoker himself. Nobody knows whether Joe Paterno was a smoker or not. As reported by Amina, he had no history of smoking known to the public. However, his lung cancer is believed to be caused by cigarette smoke, most probably from the secondary smoke. In other words, smoking can cause serious health problems to non-smokers also if they are forced to breathe the secondary smoke somehow.

In Los Angeles Times on November 16, 2011, Karen Kaplan wrote that smoking could cause heart problems and other diseases. In his opinion, children are more vulnerable to secondhand smoke since they take more breaths than adults (Kalpana)

About 20% of all deaths from heart disease in the U.S. are directly related to cigarette smoking. That’s because smoking is a significant cause of coronary artery disease. The nicotine present in smoke causes heart disease by Decreasing oxygen to the heart, Increasing blood pressure and heart rate, Increasing blood clotting, Damaging to cells that line coronary arteries and other blood vessels(Smoking and Heart Disease)

Many people have a false belief that smoking can cause only breath problems and lung cancer. One of the primary reasons for many heart diseases is smoking. Oxygen is necessary to make all the body organs functional. It should be noted that our brain may not function properly in the absence of proper oxygen supply. Malfunctioning of the mind can cause considerable problems to other organs in the body since the brain acts as the body’s central processing unit, which gives instructions to all the different parts of the body for safe functioning. The first thing advised by doctors before starting the treatment of a heart patient is to stop smoking. All the treatment methods may become ineffective if the patient is not ready to give up his/her smoking habits.

“Smoking damages the inner lining of arteries. This thin layer of tissue, called the endothelium, is a big source of nitric oxide. Stopping smoking allows arteries to heal and make more nitric oxide” (Two-way street between erection problems and heart disease, p.4). Coronary diseases or heart problems are the second primary disease caused by smoking. Even though nitrous oxide (N2O) is a poison gas, mainly used for anesthetic purposes, nitrous oxide (NO) is useful to many of our bodies’ physiological and pathological processes. A sufficient amount of NO is necessary to protect the liver from damages. Moreover, no deficiency can cause many other problems such as diabetes, multiple sclerosis, arthritis etc. The endothelium is one of the significant sources of nitric oxide, and any damage that occurs to endothelium can affect NO production, and subsequently, many diseases can develop. It is already established that tobacco smoke can affect the endothelium, and later NO production among smokers will be affected.

Some people have the illusion that a limited number of cigarette smoking may not cause any health problems. Many others have the false belief that filter cigarettes are comparatively safer than other types of cigarettes. These are some of the myths prevailing among smokers. It has nothing to do with facts. As mentioned earlier, even secondary smoke breathers are suffering from health problems and therefore, it is impossible to argue that few cigarettes may not harm health. Of course, it is a fact that more cigarettes per day may increase the chances of heart attacks and other problems, whereas fewer cigarettes may decrease it. However, it is difficult to conclude that one or two cigarettes per day may not cause health problems.

Another major problem which can be developed as a result of smoking is psychological and emotional problems. Lawrence et al. (2010) have concluded the following things after a comprehensive study to examine the relationship between smoking behaviour, mental disorders and emotional and behavioural problems in a nationally representative sample of young people;

Seventy-two percent of young people with mental issues have smoked in the last 30 days, 46% of adolescents with depressive disorder and 38% of adolescents with attention deficit hyperactivity disorder. Young people with mental health issues were more likely to begin smoking, move to regular smoking, and smoke more heavily after controlling for demographic and socio-economic factors. In young people, mental illness is an important topic to address tobacco control (Lawrence et al., p.805)

One of the powerful illusions among smokers is that smoking may cause only physical problems, and psychological problems may not develop due to smoking. Smokers believe that they are getting mental relaxation while smoking, and therefore, cigarette smoke has a soothing effect rather than any detrimental effects on mood or emotions. However, the study results above clearly suggest that smoking can also develop psychological problems. Many of the psychological issues created as a result of smoking are indirect. For example, smoking can cause impotence, ulcers and fertility problems along with other physical problems. It should be noted that any biological questions can cause massive damage to mental health. For example, impotence may create a lot of topics in the life of couples. Impotence may prevent couples from enjoying their married life properly, and therefore emotional and behavioural problems can arise. In teams, if one person happens to be a smoker and the others happen to be an enemy of smoking, many conflicts can arise. Non-smokers usually avoid the company of smokers, and therefore, smokers may develop a feeling of isolation.

Amy Norton wrote an article in Los Angeles Times on August 3, 2011, that “young people with depression or other mental health disorders may learn to use smoking or drinking as a way to “self-medicate” (Norton). Smoking and mental problems have a bidirectional relationship. In other words, smoking can cause cognitive problems and mental problems can lead to smoking behaviour. Young people are mostly taking shelter in smoking because of some emotional issues.

As mentioned earlier, lots of scientific researchers have established a link between many diseases and smoking. Yet the authorities are not taking any stern action against smokers. References are usually satisfied with enforcing a statutory warning on smoking-related ads like “smoking is injurious to health.” However, tobacco products manufacturers put this warning at hidden places of the cigarettes labels or tobacco advertising and as small in size as possible to watch it easily. Even then, all the people know that “smoking is injurious to health.” However, smokers are not ready to give up their bad habits since smoking is psychological rather than physical.

Most of the people in this world are aware of the negative impacts of smoking habits. However, the number of smokers is increasing day by day because of various reasons. In my opinion, increased mental stress causes people to take shelter in smoking even though they are aware of the physical and psychological problems smoking can develop.

As you know, lung cancer is the most dangerous disease associated with smoking. About 86% of all deaths caused by smoking are due to lung cancer. It can be caused by secondary smoke also. Tobacco contains more than 4,000 chemicals, which may cause different types of diseases to the smoker and the secondary smoke breathers. Out of these 4000 chemicals, 43 can cause cancer disease.

The second most health problem associated with smoking is coronary problems. About 20% of all deaths from heart disease in the U.S. are directly related to cigarette smoking. The nicotine present in smoke can decrease oxygen supply to the heart. It can increase blood pressure and heart rate. Moreover, it can increase blood clotting; all these problems can lead to severe heart problems. Another damage caused by smoking occurs in the arteries’ inner lining called the endothelium, which is a significant source of nitric oxide. You know Nitrous oxide (NO) is necessary to sustain many of our body’s physiological and pathological processes. Smoking can decrease the production of NO, which can cause severe health problems.

In short, smoking can cause considerable damages to health, and therefore people should avoid smoking habits under all circumstances.