Sumatran tiger, also known as Panthera tigris Sumatra, is found only in Sumatra’s Indonesian island’s tropical forests. In 2008, the International Union for Conservation of Nature (IUCN) classified the Sumatran tiger as ‘critically endangered,’ which is the highest threat (Linkie, Wibisono, Martyr & Sunarto). According to the IUCN, the Sumatran tiger’s current population is around 176 to 271 mature tigers with subpopulations having less than 50 members – a number that is gradually decreasing (Linkie, Wibisono, Martyr & Sunarto). The World Wildlife Fund records that tigers were once present in Bali and Java, but extensive deforestation and an increase in poaching in the country have caused these tigers to be wiped out of these regions. The Sumatran tigers also seem to follow the same path. Increasing deforestation and poaching have caused the population of Sumatran tigers to decline steadily, and therefore intergovernmental partnerships and stringent policies have to be implemented to conserve these animals. 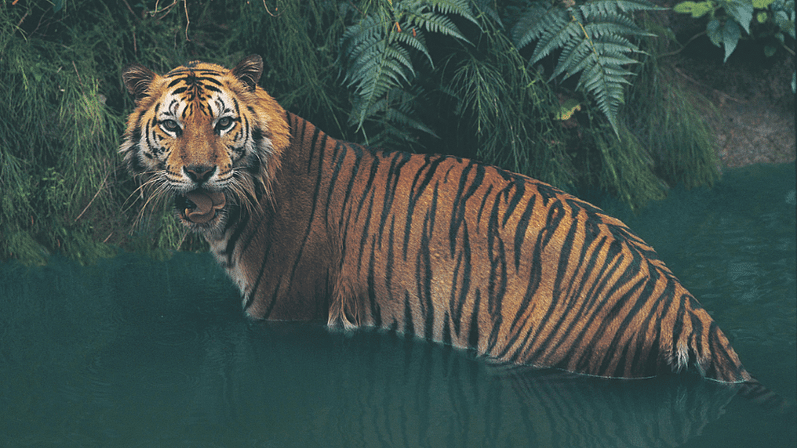 Sumatran tigers are the smallest among the tiger subspecies. They grow to a length of about 250 centimetres with males weighing about 100 to 140 pounds and female weighing about 75 to 110 pounds (World Wildlife Fund). The small size of the Sumatran tigers helps them to move easily and quickly through the Indonesian jungle. The heavy black stripes on an orange background are narrower than the other tiger species and help them blend in with the tall grass, their natural habitat. The Sumatran tiger also has webbings between their toes, which allow them to swim well in the water, especially while chasing their prey. They commonly eat animals like wild boar, deer, fowl, monkeys, and fish.

Significant Threats to the Sumatran Tigers

Two significant factors have critically endangered Sumatran tigers-agricultural development and increased poaching. As a result of the agricultural product, Sumatra has undergone extensive deforestation, especially in palm oil production (Shepherd & Magnus 6). This has forced the tiger populations to restrict themselves to the national parks of Kerinci Seblat and Gunung Leuser and some vulnerable areas. Tigers living in weak areas are again at increased risk of poaching and killing as they often enter nearby villages searching for food.

Sumatran tigers have been hunted for their bones since the 1990s, which is an essential ingredient in traditional Asian medicines, primarily for treating rheumatism (Shepherd & Magnus 15). Tiger bones and other tiger items are also used in magic practices that are carried out in Sumatra and other parts of Indonesia. These goods are used as “prescription ingredients or as amulets for warding off evil spirits” (Shepherd & Magnus 11). In fact, in the South Korean Customs import records (Shepherd & Magnus 37), Indonesia was listed as the leading supplier of tiger bones and other tiger items from 1975 to 1992. Even the Sumatra tigers hides and bones are sold worldwide. Also used for custom making gold pendants are tiger teeth and claws to appeal to foreign visitors.

Tiger skins and stuffed tigers are also in great demand on the domestic market, as the primary buyers are police officers, army personnel, government officials, and businessmen (Shepherd & Magnus 38). Investigations have also shown that specific individuals in domestic and foreign markets are also interested in selling these tigers to the zoo and private collections. It is common to practice for police or junior military officers to present their superiors with tiger skins to gain their approval and be promoted to a higher level. Often tiger skins are offered as “businessmen’s gifts to help close a business deal” (Shepherd & Magnus 17). In Indonesian culture, having tiger skins or live tigers is often regarded as a symbol of prestige.

The following are some issues that have directly or indirectly affected the Sumatran tigers:

The Indonesian government has instituted strict rules that include jail time and high fines to protect the Sumatran tigers. However, there is still a large market for tiger products in Sumatra. According to a survey conducted in 2002, nearly 25% of the shops and dealers surveyed had tiger products for sale, including canines, claws, skin, and bones, all of which are sold secretly to the customers (Shepherd & Magnus 62).

Investigations have found that Sumatran tigers are usually killed by professional or semi-professional hunters who work individually or as small groups (Shepherd & Magnus 67). They typically use cheap and straightforward wire cable leg-hold snares for hunting these tigers. Sometimes, these traps are set to catch other animals, and the tiger gets killed by accident. Research has revealed that at least four Sumatran tigers are killed every year in such accidents, and its parts are then sold in the market (Shepherd & Magnus 68).

Sumatran tigers have been killed or wounded by humans as they frequently prey on domestic animals. Villagers often kill these tigers instead of contacting the Forestry department to trap and remove the region (Shepherd & Magnus 68).

Despite the conservation efforts, Sumatran tigers are killed in large numbers for commercial gain. According to a recent investigation, poachers have been found to hunt the tigers deep inside the tiger sanctuaries (Shepherd & Magnus 68). The bones and other parts of the Sumatran tigers are smuggled out of Indonesia and sold to countries like Korea, Taiwan, Singapore, Japan, Malaysia, and China (Shepherd & Magnus 69).

Lack of political interest and widespread corruption is also an essential factor that affects the reduction in the Sumatran tigers population.Extensive illegal logging and timber harvest in Sumatra has also resulted in significant loss of the Sumatran tigers’ habitat.

Currently, there are a few organizations that are involved in the conservation of the Sumatran tigers. In 2006, the Senepis Buluhala Tiger Sanctuary foundations were established by the joint effort of the Indonesian Forestry Service, Natural Resources and Conservational Agency, Sumatran Tiger Conservation Program, Commercial concession holders, and Asia Pulp and Paper (Sumatran Tiger Trust). The Senepis Buluhala Tiger Sanctuary has 106,000 hectares and is located in the province of Riau. The current focus is to determine the tigers’ feeding behaviors and develop strategies to protect both the tigers and human settlements (Sumatran Tiger Trust). In 2007, the Indonesian Forestry Ministry and Safari Park and the Australian Zoo joined forces to work towards the conservation of Sumatran Tigers and other endangered species (Sumatran Tiger Trust). This program also reduces the conflicts between tigers and humans and keeps the tigers in their natural habitat.

Recommendations to Save Sumatran Tigers

With the decrease in the Sumatran tigers’ natural habitat and the booming market for tiger products, effective policies need to be developed to address this issue. The following are some recommendations to save the Sumatran Tigers:

The Indonesian government should impose strict laws that ban tiger products both within the country and internationally. This should reduce the issue concerning poaching of the Sumatran Tigers (Shepherd & Magnus 70).

The Indonesian government should also control the harvest of timber and illegal logging within the country and focus on land conservation (Shepherd & Magnus 70).

Proper systems should be implemented to handle the instances when tigers enter areas inhabited by humans so that the people’s safety can be assured, and the tigers are also protected. Such tigers should not be killed but returned to the wild or transferred to a zoo.

Support from the international community should be sought to decrease tiger products as a symbol of luxury. An extensive effort should be taken to increase the awareness and importance of conserving the Sumatran Tigers (Shepherd & Magnus 70).

In conclusion, the Sumatran tigers are critically endangered species, and their numbers are steadily decreasing. Although several policies have been established and few organizations have been working to address this issue, a lot more needs to be done to stop this animal’s poaching and killing. Creating awareness, implementing strict policies, and developing international partnerships is very important to address this issue.

What are the Mental and Physical Effects of Alcohol