What are the Mental and Physical Effects of Alcohol

Alcohol consumption is a common societal practice and an evil that has penetrated the social fabric since time immemorial and is submerged in social customs. Although a drink or two is presumably perceived to be harmless, addiction to alcohol may cause a long-lasting negative impact on an individual’s physical and mental health. The consequences and repercussions of alcohol consumption can be analyzed from various perspectives, to understand and assess the extent of damage it can cause. The consumption of alcohol not only tends to harm the individual consuming it but also those around them, thus, disrupting their social relationships in the process. Various studies have been conducted in the past to assess and examine the impact of alcohol on an individual’s well-being with varying results. There are different external as well as internal influences that trigger such a habit. These influences include social, cultural, mental, or political influences. It is the interplay of all such external and internal factors that determine the degree and extent of addiction to alcohol. According to the psychological perspective, alcohol dependence indicates a response to various external factors and situations. 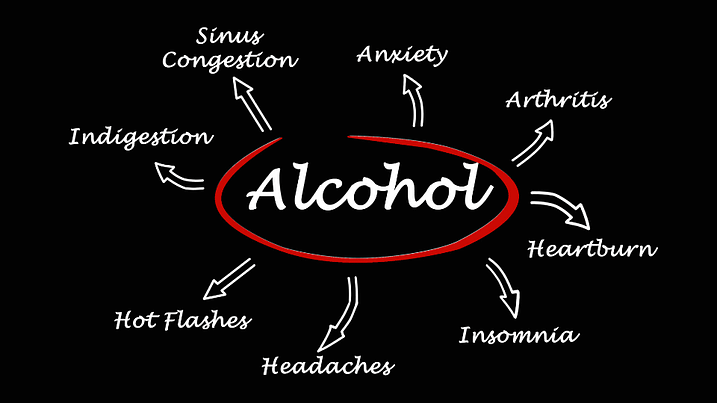 Impact of Alcohol – the Cognitive Perspective

The cognitive perspective is a modern psychological perspective that focuses on how intelligence, memory, problem-solving, learning, etc. are influenced. According to this theory, the reliance on alcohol and other similar addictive substances is perceived as a “learned” behavior acquired through experience and observation. For instance, if the repeated consumption of alcohol leads to positive outcomes such as reducing stress levels or feelings of inner peace, it becomes the preferred means of dealing with negative emotions. According to research, reliance on alcohol is strongly associated with a series of factors such as reduced cognitive abilities about working memory; conditional associative learning and the individuals’ intelligence levels (Aytaclar, Tarter, Kirisci, & Lu, 1999; Finn & Hall, 2004; Harden & Pihl, 1995; Pihl, Peterson, & Finn, 1990; Poon, Ellis, Fitzgerald, & Zucker, 2000).

Any setbacks suffered from regard to such critical factors associated with an individual’s cognitive ability or functioning leads to an emotional response or behavior (Finn, 2002; Finn & Hall, 2004; Giancola, Zeichner, Yarnell, & Dickenson, 1996; Harden & Pihl, 1995). It has been established that there is a direct relationship between the alcohol and cognitive functioning of individuals, as it is due to internal and external cognitive factors that lead to an individual’s dependence on alcohol abuse.

Impact of Alcohol – the Socio-Cultural Perspective

The socio-cultural perspective of psychology studies the effects of social and cultural influences on the individual’s behavior. This includes the result of factors such as age, gender, race, lifestyle, income, etc. as they play a significant role in influencing and shaping our actions. This perspective helps understand the role socio-cultural factors play in accentuating a specific type of behavior by intoxicated men. Consumption of alcohol is closely associated with violence. Several studies have focused on how alcohol abuse almost invariably culminates into partner violence. Several studies on partner violence have identified problem drinking as one of the critical reasons behind females’ aggression. According to a recent study, almost forty percent of men enrolled in counseling for partner violence were diagnosed with alcohol abuse or a high reliance on alcohol (Fals-Stewart, 1992).

It is also observed that there is a high dependence on alcohol increases the risk of partner violence during a significant conflict, i.e., alcohol leads to a rise in aggression levels which is caused due to a substantial reduction in the ability to process information correctly and hence resulting in a reduced capacity to instantaneously when provoked. However, researchers have now pointed out the role of other factors, such as those related to an individual’s social or personal developmental factors, on accentuating/fuelling such violence when under intoxication. According to studies, partner-related violence by men under the influence of alcohol when compared to those without such a power, highlights the fact that those having a violent streak, even without the influence of alcohol or those who are diagnosed with personality disorders are more likely to indulge in such acts, are more affected by alcohol abuse as compared to their counterparts (Murphy, O’Farrell, Fals-Stewart, & Feehan, 2001; Murphy & O’Farrell, 1994).

The socio-cultural perspective highlights the critical differences in alcohol consumption by diverse social and cultural norms, followed by individuals. The various internal and external factors, such as self-esteem, association with certain power groups, values, expectations, gender-based roles, and differences, play a crucial role in determining the degree of reliance of individuals on alcohol. The socio-cultural factors play a significant role in alcohol consumption patterns and the responses and consequences of such excessive dependence on the same. The study conducted to examine the relationship between violence and alcohol abuse is a case in point, whereby it was established that the aggression resulting from alcohol abuse lies in the essential intrinsic nature of the individuals, which in turn, is an outcome of one’s socio-cultural backgrounds.

Impact of Alcohol- the Biospyschological Perspective

The biopsychological view is a combination of psychology and physiology of the brain in studying mental processes and human behavior. This is a form of modern psychological perspective, which entails that every social action, feeling, or emotion is triggered by a simultaneous and corresponding physical event in the brain. The key objective of this perspective is to attempt to understand the relationship between the two. According to various studies, the excessive and repeated consumption of food or drink is categorized as an addictive behavior with deep neurobiological roots. Researchers believe that there is a deep relationship between the continuous consumption of a particular food/drink and an inverse relationship between individuals’ alcohol dependence and body mass index.

According to recent research conducted to assess the impact of excessive food consumption, such a habit is perceived as addictive. The claim/belief is, however, further confirmed when studied from a biological and behavioral perspective. Various researches and studies conducted to analyze the causes and repercussions of excessive food consumption, based on tests performed on animals and the investigation involving humans, suggest that such an excessive consumption of food is closely associated with neurobiological transformations in the human system which in turn is triggered by consumption of addictive substances such as drugs (Hajnal, Smith, & Norgren, 2004; Hoebel, Rada, Mark, & Pothos, 1999; Mark, Smith, Rada, & Hoebel, 1994; Nieto, Wilson, Cupo, Roques, & Noble, 2002; Volkow et al., 2003). Based on various experiments conducted on animals, it was observed that the consumption of sugar lead to an increase in their tolerance levels and the animals tend to display symptoms of withdrawal (Hoebel et al., 1999; Nieto et al., 2002) which are known to be the vital characteristic traits of addiction. Similar observations have been made about alcohol, which is known to have similar characteristics with other highly addictive food substances such as high-fat foods, or food high in sugar. Studies concerning the study of emotions, both alcohol, and food high on fat, have been consistently used to control emotions (Canetti, Bachar, & Berry, 2001; Cooper, Frone, Russelll, & Mudar, 1995). Thus, it has been amply proved that alcohol is known to influence human behavior by controlling their emotions.

Although consumption of addictive food is known to have a significant impact on human emotions, the individuals’ characteristics also play a significant role in defining how they react. Such reactions, in turn, are highly dependent on their biological makeup. Individual physical traits play a crucial role in influencing their behavior or reactions such as loss of self-control, loss of ability to stop consumption of such addictive food, etc. (Kleiner et al., 2004).

Each of the contemporary psychological perspectives discussed above focuses on different factors/elements of human behavior, presenting multiple explanations for a particular phenomenon, and expanding our insights. It can not, however, be correctly assumed that either of them is a complete analysis in itself. Even when examined in groups, i.e., a mixture of all or any of these modern psychological viewpoints, intending to study or investigate a specific phenomenon, such as the effect of alcohol, in this case, it gives us a broader perspective. It allows us to consider the same in many ways. Historically, psychologists have researched human behavior and have tried to examine it from different viewpoints and with the aid of other theories, especially about ideas of human strengths and weaknesses; emotional distress; hope, despair; violence and aggression; etc.; and the effect and influence of various external factors on their behavior.

Thus, the study of human psychology offers a wide area for researchers to examine a given phenomenon from various psychological perspectives. It not only helps in understanding the impact of individual factors from different perspectives, but also helps in broadening our views on the subject, and hence presenting newer opportunities for further research.

Have you ever earned $765 just within 5 minutes?
trade binary options